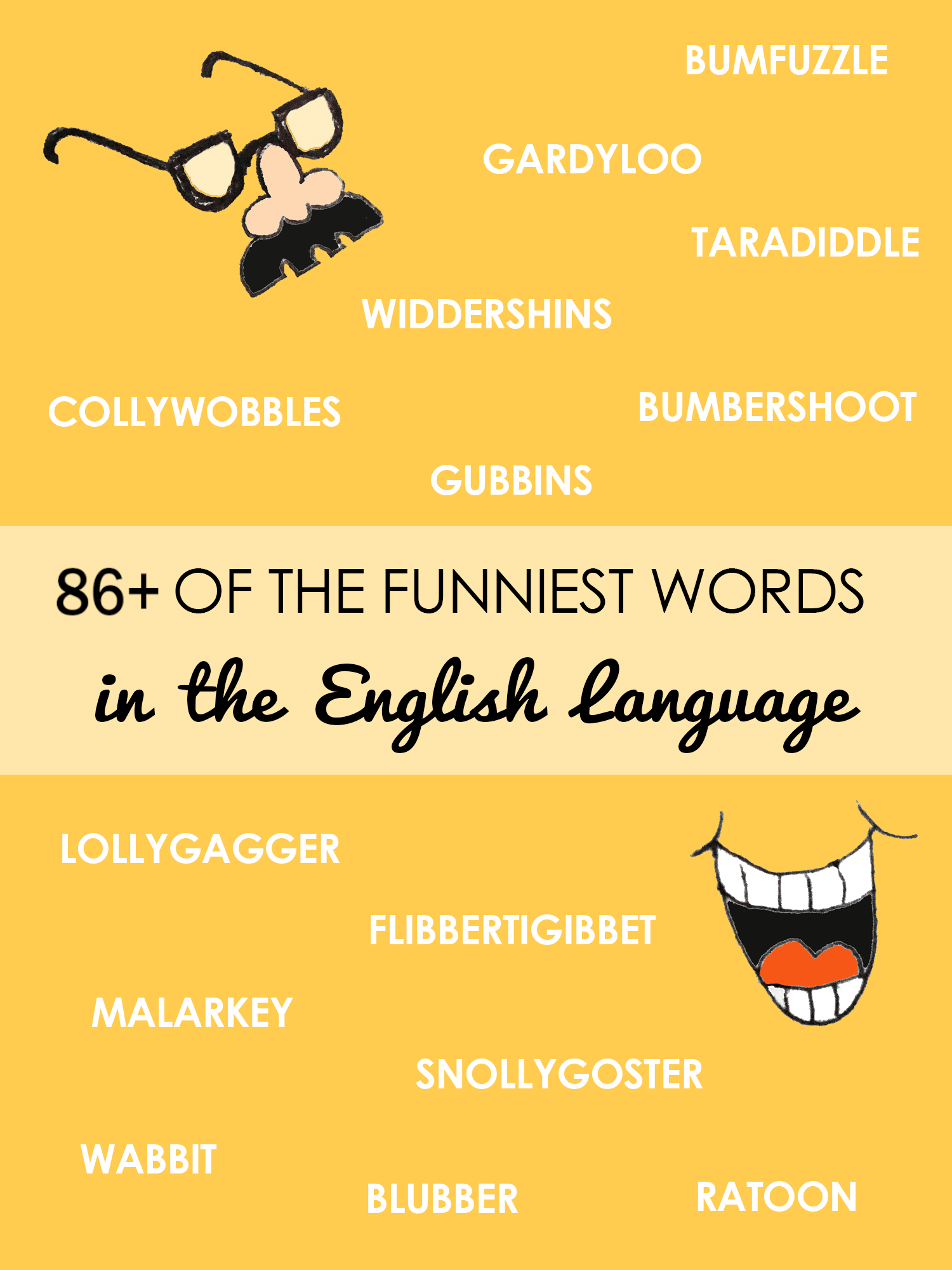 Did you know the English language is the most complicated language to learn as a second language (Japanese a close second)? Not so surprising when you think about words like, they’re, there and their. And not to mention the confusing plural nouns, like goose is geese, but moose as a plural is moose. To celebrate the beauty, the sophistication and the history of the English language there is even a holiday on April 23rd each year named English Language day (which is also William Shakespeare day – The famous English writer). While there are millions of brilliant words in the English Language, today we look at 25 of the funniest words in the English language. I hope you love them, as much as I do!

Here is our A-Z of funny words you need to know about!

Funny Words starting with A:

Sentence: I’m almost finished with my abozzo of the Eiffel tower.

Sentence: Amas have been diving for pearls in the Japan region for many years.

Sentence: I’m taking the araba through the city today.

Sentence: The aye-ayes are such cute little creatures.

Sentence: I have been bamboozled again by you.

Brouhaha in a sentence: Last night’s event was such a brouhaha and nothing was achieved.

Bumbershoot in a sentence: Don’t forget your Bumbershoot, dear.

Sentence: To get to the school, you need to walk catawampus across that park over there.

Collywobbles in a sentence: This place gives me the collywobbles, let’s go!

Sentence: This house looks a little dingy to me.

Donnybrook in a sentence: A Donnybrook broke out last night when the police when to arrest the leader of the operation.

Sentence: No-one wants to be a dweeb.

Funny Words That Start With E:

Sentence: Egad! I never thought of that!

Sentence: Eep! That was scary!

Sentence: That poem was just epos!

Gardyloo in a Sentence: Watch out, Gardyloo coming!

Sentence: I’m so happy my offer to buy the house next door was accepted, but what if I get gazumped?

Gubbins in a sentence: No one’s going to buy your gubbins.

Sentence: Cats are cute, but I hate it when they throw-up hairballs everywhere.

Sentence: Now that was hokey old movie to watch!

Sentence: Those footballers are always having to deal with hecklers at their matches.

Sentence: That ladybird is so itty-bitty.

Sentence: I’m afraid of saying that in public, as it’ll be against my izzat.

Sentence: Everything he just said was complete Jabberwock.

Sentence: He jinked out of the way, as the ball came towards him.

Sentence: The rare Kagu can be found in the Pacific island of New Caledonia.

Sentence: The kaka parrots are so cool!

Sentence: The chickens love this new brand of kibble.

Sentence: Just like the loch ness monster, the Kraken is a myth.

La-di-da in a sentence: She thinks she is all La-di-da, but I know what she’s really like.

Sentence: They spent their summer lying about, eating and general lollygagging.

Sentence: He was out of the door lickety-split.

Malarkey in a sentence: This is all malarkey, I tell ya!

Sentence: This blanket seems a little moist to sit on.

Sentence: I’m going to have a quick nacket before dinner.

Sentence: Napooh! That’s the end of that story.

Nincompoop sentence: You act like such a nincompoop sometimes.

Sentence: That pink obi would look nice with this kimono.

Sentence: That table is dripping in ooze.

Sentence: The oompah music in the background really set the tone.

Sentence: Look sharp, the patroon will be here soon.

Pettifogger in a sentence: Why do you look up to such a pettifogger?

Sentence: That baby bird is still just a quab.

Sentence: Understanding quarks of fundamental to the world of physics.

Sentence: That’s so quoz! No-one wants to eat cheese and ice-cream together!

Sentences: Those rugrats don’t know what’s coming to them!

Sentence: That ruddy-faced girl was someone I never seen before.

Skedaddle in a sentence: This is no place to play your silly games, now skedaddle before I get you!

Shenanigans in a sentence: What’re all the shenanigans about?

Snollygoster in a sentence: I don’t want any help from a snollygoster.

Sentence: Your cake is simply supercalifragilisticexpialidocious!

Taradiddle in a sentence: That’s such taradiddle –  I don’t trust you at all!

Sentence: Can you pass that thingamajig over?

Sentence: That’s a really uber-looking coat you got there!

Sentence: The Urubu is a rare species of bird found in America.

Sentence: This puzzle has really got me vexed.

Sentence: Have you prepared for the upcoming veepstakes?

Widdershins in a sentence: Only widdershins going down that road.

All words beginning with X are funny ones!

Sentence:  This make-up makes my skin look a little Xanthoderm.

Sentence: Let’s take a ride on my new Xebec.

Sentence: These yabbies are going to taste delicious.

Sentence: I have a yachty-looking T-shirt.

Sentence: The dog yaffed at the mailman.

Sentence: That movie was a little yawny.

Sentence; She yerked at the rope, as they tried to pull the bucket up from the well.

Sentence:  Her zaftig figure was admired by all.

Sentence: Jenny brought herself a new zazzy handbag to match her shoes.

Sentence: The sound of the zeze is unique in South Africa.

Sentence: James likes to take a 2-hour zizz every afternoon at 2 pm.

Zoanthropy in a sentence:  I think she suffers from a mild case of Zoanthropy.

What do you think of our selection of the 25 funniest words in the English language? Do you have any more to add on? Let us know in the comments below. In the meantime, why not take a look at our post, 12 Words Beginning with X Used in Sentences.

25+ Words Starting with X Used in a Sentence