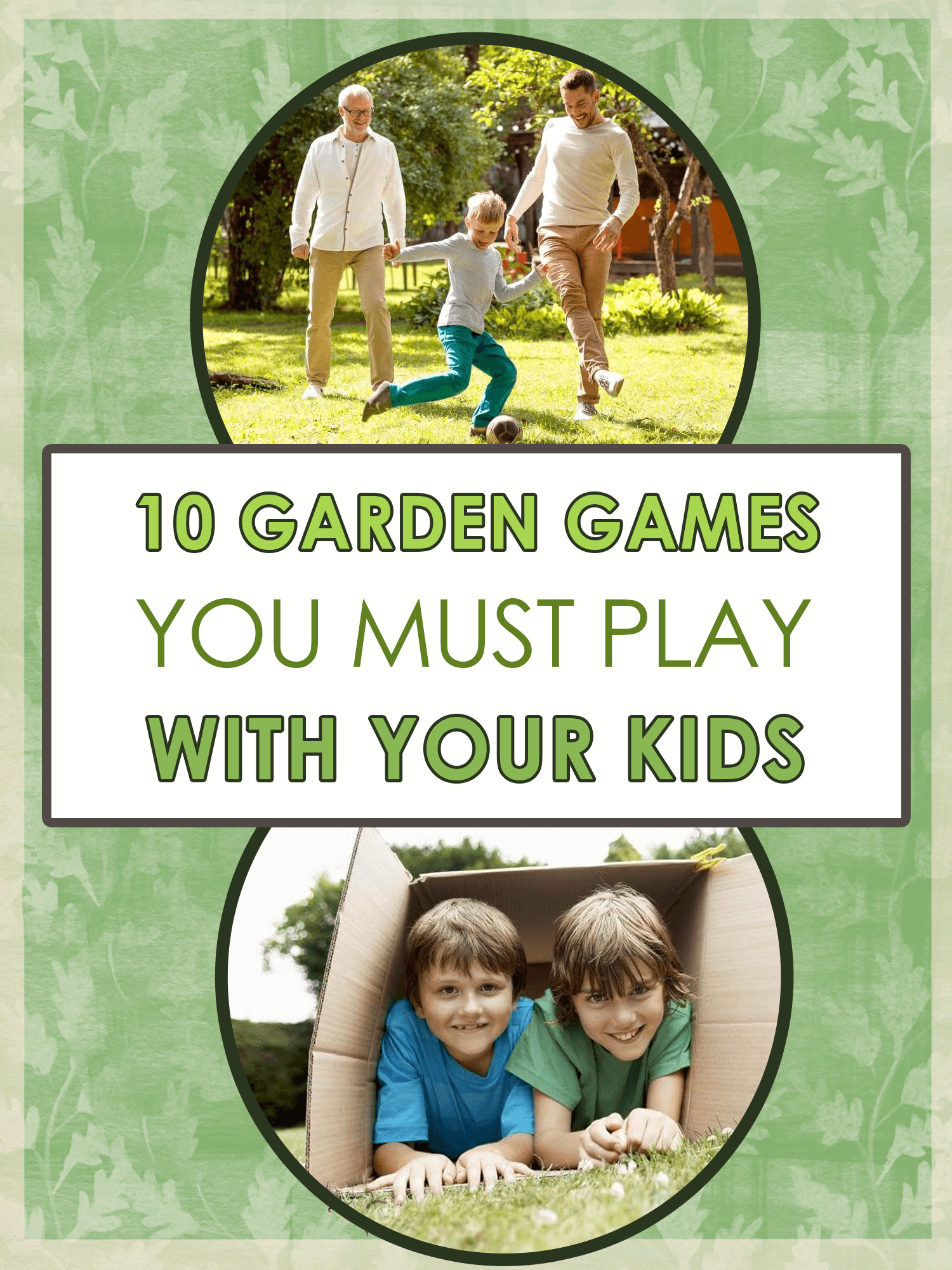 It might be cold out there,  but don’t worry we have the perfect activities to warm you up! Here’s a cool idea, you can transform your garden into a playground by creating various garden games for kids. Garden games are not just for kids, you too can get involved and build quality relationships with your children. So, whether it’s summer, spring or autumn, you can always cheer your kids up when you play games some good old fashion garden games. You might even enjoy these 10 activities with fallen autumn leaves. Here is a list of 10 garden games for kids you must try out.

It is a fantastic game to play with your kids and friends and a perfect summer outdoor activity. You will need some water balloons of two different colours filled with the same colour as the balloon. You have to pick and choose your team.

You can record a video of the game to later watch for fun. If you don’t want to be involved with your kids in the game as you feel you cannot move swiftly as they do, you can be a referee and give a live commentary. 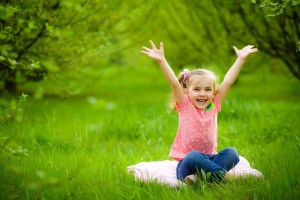 Natural art involves collecting natural stuff like twigs, leaves, grass, flowers, etc. to create something beautiful. You can get involved with your kids and make small huts using the twigs, grass, etc. It is a lot of fun, and your kids will get their creative juices flowing once they realize how amazing it is to bring your ideas to life. This activity is perfect during autumn with so many things to find on the ground.

You don’t necessarily need to use only the natural stuff. You can bring cardboards, crayons, sprinkles, tapes, gums, etc., but you must use stuff from your garden.

Choose a playing area which is rectangular with two end zones. Divide your teams, and you can even involve your dog into the game if you have one. Your dog can catch frisbees after training. To score a point, you must catch the frisbee in one of the end zones, thrown by your teammates. When a point is scored, the teams will switch ends. For a pass to be legitimate, it has to be caught. For intercepting, you have to catch the frisbee or slam it to the ground.

The blanket run is an amazing game to play in the garden with your kids. You will need some old blankets that you don’t mind spoiling in the mud. Divide your teams.

You can alter the rules as you like, but sitting on the blanket while sliding over the ground is a lot of fun. 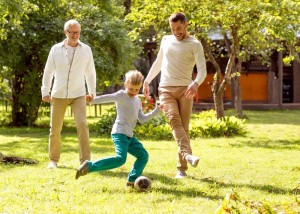 This game is an urban variation of the game, ‘Hide & Seek.’ You will need an empty can for kicking. At least, three players are required to play this game. Play this game on the ground with a lot of hiding places. Choose a player to be ‘It.’

If ‘It’ finds a player hiding, he/she has to call out their name. Once, a player’s name is called out the player and ‘It’ has to race towards the can to kick it first. If the found player kicks the can, the game restarts. If ‘It’ kicks the can first, the hider goes to jail. ‘It’ does not need to physically tag a player, he has to call his name and the place behind which he is hiding. The other player who has not been found yet can come to kick the can without being spotted by ‘It’. If he kicks the can, the jailed player will be released, and the game will begin again. However, if ‘It’ spots them, the player has to go to jail as well.

All you need is a rope and some players to play this game. Divide the teams. Mark the centre of the rope. Place the rope on the ground with a flag. The flag and the marker on the rope should be in the same spot before the game begins. Mark the points on both sides of the rope beyond which the players are allowed to hold the rope. All players should get ready and hold the rope, and the game begins. Once a team succeeds at pulling the majority of the rope towards their side, they win the game. 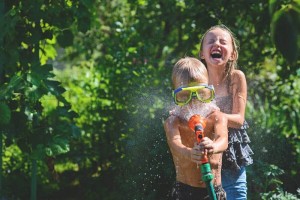 You will need strings, empty cups, something to make a hole and water guns to play this game. Build parallel string tracks to play this game with your friends. You can also use a timer to play with your teammates if you cannot tie multiple strings. Make a hole into the cup and put it onto the string. You have to push the cup to the end-point using the water gun. The player whose cup reaches the end point faster or in less time wins the game.

If you like slingshots, you will love this game. To play this game, you will need two large totes filled with water, two small empty buckets, twenty kitchen sponges and two 3-person water balloon launcher. Team members use the water balloon launcher to launch the sponges filled with water. Another team member has to catch the sponge and bring it back and empty the sponge in the bucket. The team which fills the bucket first wins the game.

This one is for dog owners! Your dog plays a central role in the game. You will need forty tennis balls and two baskets to play this game. First, you divide your teams, and each team will have a basket and twenty balls before the beginning. The team members will stand at a set distance, such as ten feet from their respective baskets at the throwing points. In the beginning, the basket will be empty, and all the balls will be kept at the throwing point. All balls must be marked with something to identify which team they belong to.

The referee will blow the whistle, and one member of each team will throw one ball at the same time towards the dog. The dog has to catch a ball and bring it back to the throwing team. Each team has to try to get the dog’s attention and make him bring the ball they throw at him. Every time the dog comes to deliver the ball, the whistle will be blown for another throw. In case the dog brings the ball from a previous throw, it will still be counted. If the dog brings the ball to the wrong team, it becomes void, and it will not be counted. All the balls that the dog brings to the team must be kept in their basket by one of the team members. In the end, the team with more balls collected in their basket will win. 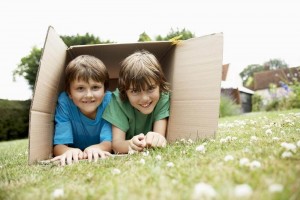 This game is played with four or six members. Divide your team evenly. To play this game, you will need some water bottles, a rod to pass through the bottle set on a wooden platform. You can make the wooden platform using some 2×2 planks. Each player will need this wooden structure. You show the bits of dog biscuits going into the bottle. Your dog has to bring it out by rolling the bottle on the structure. He eats the bits when they fall out of the bottle.

The players will make a circle with one member from a different team sitting alternatively. Each team member will be given an equal number of bits of the dog biscuits. The game will begin with the dog at the centre of the circle. Each player has to try to lure the dog by showing him the bits putting in the bottle. No player is allowed to put more than five bits at a time, and if a player intentionally or accidentally puts some bits out on the ground instead of putting in the bottle, the player gets disqualified. The game begins with a timer, and at the end, the number of bits left with the players is counted. The team left with more pieces of biscuits loses the game.

The games that you play with your kids and family can give you long-lasting memories, wonderful times and a good workout. You really must try the above-listed games to let your kids have a great time and teach them skills, such as team work and communication skills.

Ella Wilson
This is Ella Wilson, the founder of TinyPlantation.com. I have a great interest in plants and gardens and I am fascinated with fruits and vegetables. I wish to share my passion with you through this website. Feel free to read my articles and guides and share them with others who might benefit from them. You can reach out to me anytime if you have questions.

How to Build Teamwork with Kids’ Craft Projects

10 Fun and Easy Things to do After School

5 Winter Activities for Kids During The Cold Season

5 Ways to Nurture Creativity in Your Little One