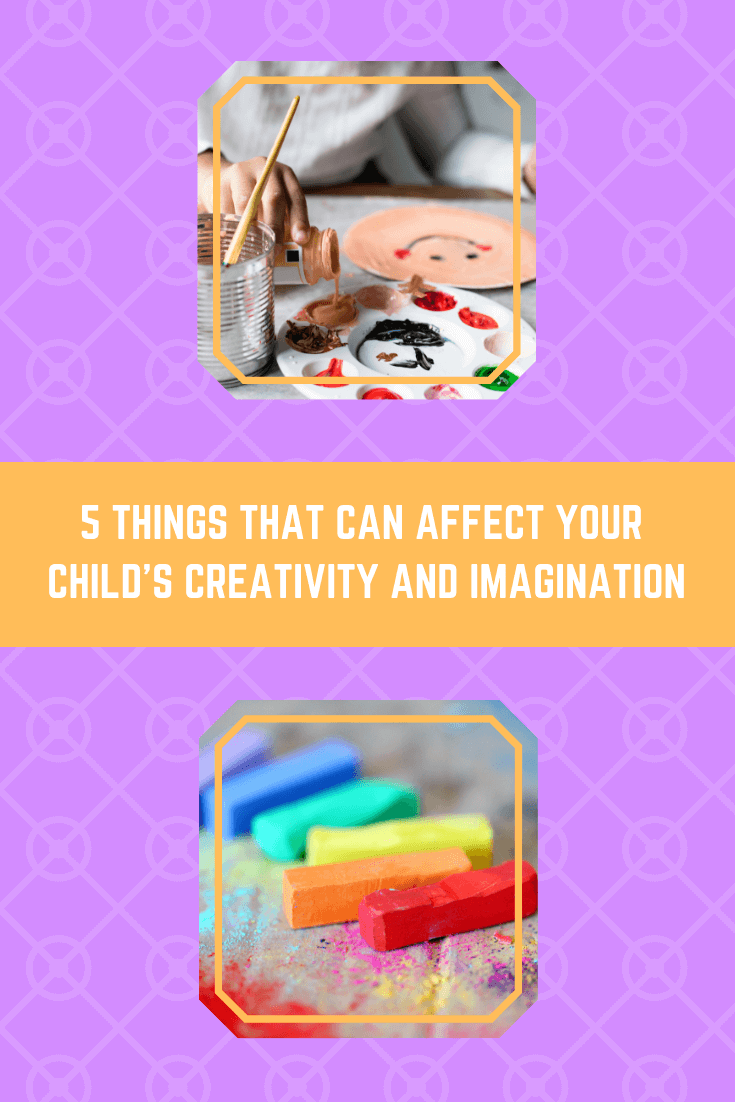 Kids are truly amazing creatures. They are so full of curiosity, ideas and thoughts on life that they can make boredom disappear from any situation. However, from a very young age, kids are being put in boxes! They are taught how to think and stripped of their creativity. But if you want to nourish your child’s creativity, there are some brilliant things you can do every day to help them out. Here are 5 things that can affect your child’s creativity:

Kids are naturally curious about the world around them. Everything is new and there’s a whole world to learn about and discover. A lot of parents (most commonly out of fear) bar their kids from interacting with the world. They don’t let them pick up leaves from the ground or even be around a stove when it’s on. Then they try to compensate by giving kids tactile books to teach them how a animal’s fur feels, instead of taking them to a petting zoo. There is a certain amount of caution that should be in any parent’s mind. But don’t stop your kids from discovering the world just because it’s an inconvenience to wash their hands afterwards. Let them be little explorers, first in their own room, the house, and then in the world.

Kids will make up stories all the time. From what their doll’s name and backstory are to what they are capable off when they are flying into the night with Batman. Let them. Their imagination is something to be admired, not corrected. If you’ve spent an afternoon playing in the park, and when you come home they tell someone about a crazy adventure you had with dinosaurs and dragons, let them. For them, that play might have been that awesome adventure. The times you should correct them is if they’re blatantly lying to get out of a situation when they know they’ve done something wrong, or when they are being malicious. But at any other time, let them be kids, daydream and make up stories. It’s what helps nurture their creativity and imagination.

Give them the chance to see the world

The more we know about the world we live in, the broader our views are. A child who spends their whole life believing that there isn’t anything of importance outside of their own city or country is a child that doesn’t know the wonders of the world. If you don’t have the funds or opportunity to take them travelling around the world, read them books about different cultures, watch documentaries and tell them about the world that they will one day be able to meet. If they’re in school, look for international schoolies in 2019 where they can experience a different place together with their friends. The more knowledge they have about other parts of the world and other cultures, the more creative they can get.

Don’t give them premade toys

When a child gets a play set that tells them exactly what they’re supposed to do to play with it, it kills the imagination and creativity of play. A much better option is things like building blocks or even clay, where they can make their own worlds and creations. If they want to play with a doll, instead of buying them one that comes from the box, get out your craft kit and make some finger puppets out of paper. This isn’t to say that they should never get the popular toys from the store, but rather that – especially when they’re young – they should play with something that inspires their creativity. And when they do play with store-bought dolls and environments, suggest to them that they can make up a world around that toy that is completely different from the one that they see on commercials.

Creativity is as much an instinct as it is learned behaviour. When a child sees their parent turn a plain cardboard box into a castle, they learn that they can do that themselves. Be creative with them: make up your own games, make props out of household items and seek out creativity in everyday actions. Most importantly – be present. If you tell your child to play, but then you sit next to them on your phone or computer, your child will be more interested in what you’re doing and try to copy that. But if you’re present every day, and you give your attention and show your creativity to your child, they will feed off it and develop their own creativity. And when you see them playing, ask them to explain things, like what is the world they’ve developed and why, because that will spark them to get even more creative on a deeper level.

When you decide to become a parent, you’re signing up for a crazy ride and you better buckle up. Remember that your child’s creativity is more important than preserving a perfect environment. When they want to draw on a wall – don’t’ get angry, hang up a big piece of paper. The biggest influence on a child is their parents, so it all starts with you. What are you doing every day to promote their creativity, give them an outlet to express themselves and what are the things you praise them for?

Stella Van Lane
Stella van Lane is a Sydney based writer and Home Design Consultant. She’s in love with coffee, chocolate, music, books and good vibes. Her top interests are health, yoga, meditation and interior design. Stella enjoys sharing her knowledge and experience with other people.

5 Ways to Nurture Creativity in Your Little One

5 Ways to Foster Creativity in Your Kids