Everyone loves a good comic, whether you’re a comic book geek or just the casual reader of a comic in your local newspaper – Comic Strips are great! While some comic strips just take a few minutes or less to read, don’t underestimate the difficulty of creating one! And because May 5th is comic book day, we decided to give you some step-by-step instructions for creating your first ever comic strip. Follow these instructions and you’ll be creating awesome comic strips in no time! Here is how to create a comic strip in 6 simple steps.

How to Make a Comic Book
How to Draw Comic Strip Characters
Comic Strip Ideas to Try Out
Comic Strip Examples
Are you ready to create a comic strip?

What is a comic strip?

A comic strip is a sequence of images with a small amount of text in each box. This text is normally inside balloons or written as captions. Comic strips (or comic books) are a form of story-telling, which uses drawings or cartoon characters to tell a story. Most comic strips are created for humour, while some can be serious.

Comic strips are most likely to be seen in newspapers or magazines. While entire comic books or graphic novels can be found at your local library or bookstore. Superman is one of the best-selling comic books of all time. You might know of other examples of comic strips or books that you’ve seen or read.

In the professional world, comic strips or comic books are created by cartoonists or professional graphic artists. But today we’ll show you how to create your own comic strip at home with no experience needed!

How to create a comic strip

As this is your first-ever comic strip we will focus on creating a three-frame comic. But when you become a master at creating short comic strips, you can make yours much longer and filled with way more characters.

Step 1:  Write your ideas for your comic

A comic strip is no different from writing a short story. It still needs a beginning, middle and ending. Because this is a three-frame comic strip, break your story down into 3 parts. Write down your ideas for the characters, settings, expressions and even speech. Make sure each part has some action and that your ending is powerful with an awesome punchline. 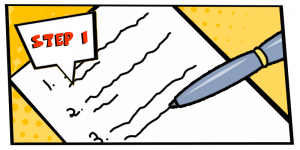 On a new piece of plain paper, draw your three frames using a pencil and a  ruler. Make sure each frame is equal size. You can even put small light marks on the paper to mark out where the speech bubbles will go. As a bonus tip, you might want to make your frames twice as big as you want them to be, so you don’t run out of space. 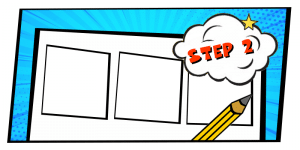 Step 3: Use basic shapes to draw

One of the hardest parts of creating a comic strip is drawing out your characters. We recommend you use basic shapes to draw out your characters. As this is your first comic strip you might even want to use stick figures to keeps things easy. Also, sketch in the speech bubbles and any starbursts for sound effects. Oh and don’t forget, please use a pencil at this stage, so you can erase any mistakes. 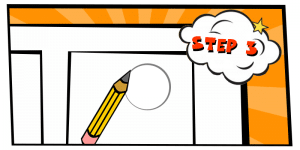 Step 4: Add in the speech and lettering 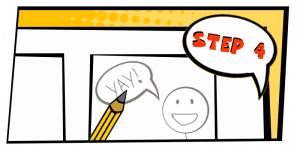 Step 5: Add detail to your cartoon

Now go back to your characters and add any extra details, such as facial expression, movement lines, shadowing on the floor. And also draw in the background for each frame. 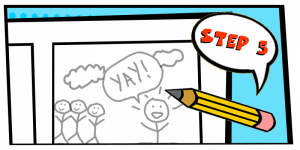 Step 6:  Go over your comic in pen

Now, you can finally use a felt-tip pen to go over your pencil drawings and rub out any pencil lines. Your first-ever comic strip is now complete – well done! You can leave it as it is or even add some colour. 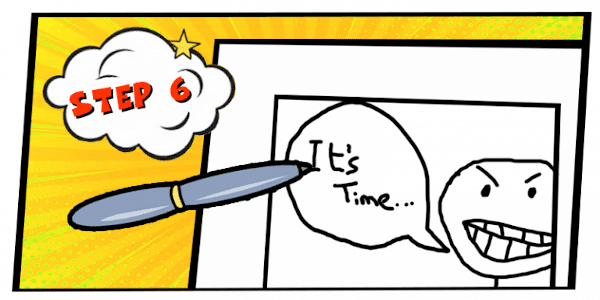 How to make a comic book

Here is a super quick step-by-step tutorial on how to make a comic book out of paper: 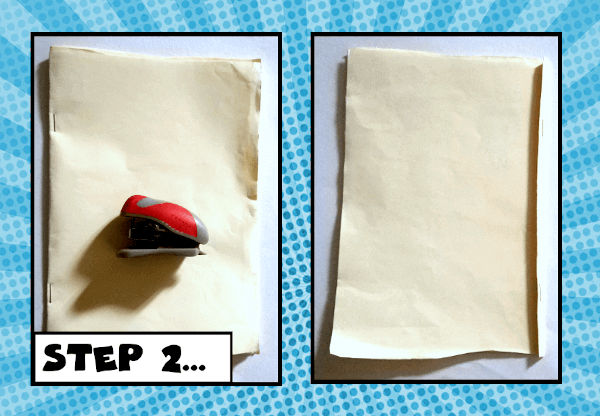 Then apply glue on the tiny folded over part of your booklet – On the side where you can see the staples. Next, stick the cover and booklet together to form your comic book. 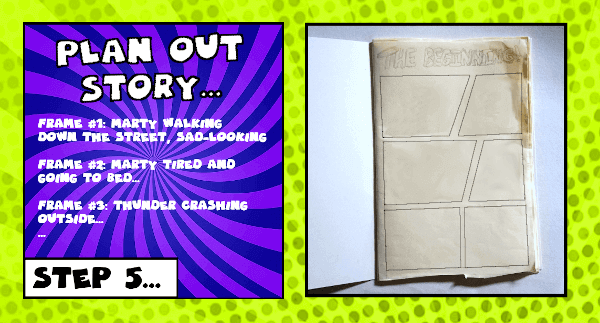 Once the planning is done, sketch out your frames and cover over them in black pen.

Carry on doing the same with the other pages in your comic book until complete.

Hooray! Your comic book is now complete. Now that you have done your first comic – Don’t stop now! Create your own comic book collection and amaze your friends with your bedazzling story-telling skills! You could even be the next Stan Lee!

Making a comic book is a great school project which can be applied to any lesson, whether it’s art, science or English. Comic books are a great way to encourage creativity in kids and build on their story-telling skills. You can even ask students to create comic books to test their understanding of a complex subject or topic.

How to Draw Comic Strip Characters

One of the hardest parts of creating a comic strip is drawing out the characters. As a beginner to the world of creating comic books, try not to worry too much about your drawing skills. For now, even a simple stick figure will do – In fact, there are many famous comics on the internet drawn entirely using stick figures!

If you want more than just stick figures, you can try out the simple steps below on how to draw your own comic strip characters. For this method, you’ll start off using a light pencil to sketch your character and then you’ll add in the colour:

Here is a little cheat sheet of all the steps involved in drawing your own comic strip character: 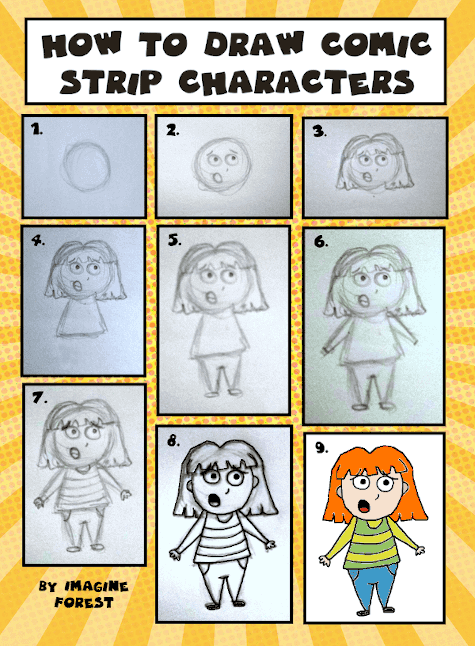 By following these simple instructions, you’ll be drawing cool comic strip characters in no time!

Comic Strip Ideas to Try Out

Now you know how to create your own comic strip the next step is to start creating more! Here are some fun comic strip ideas to try out:

We all need a little inspiration now and then. To inspire your comic strip creation, here are some simple and fun comic stripe examples: 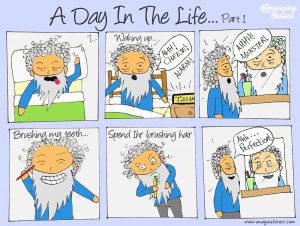 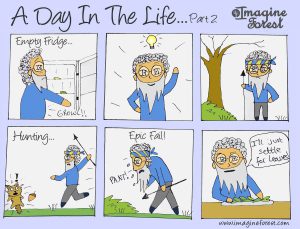 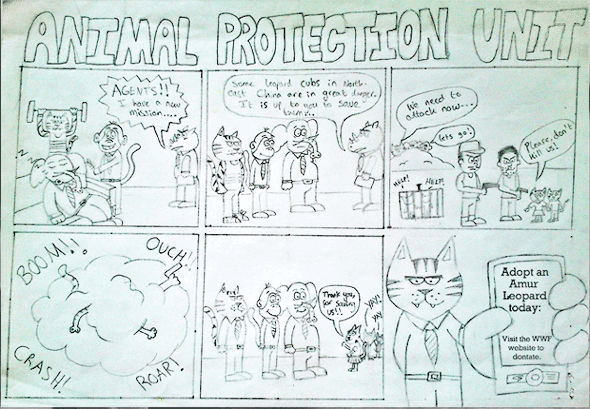 Why not continue the comic strips in these examples or create your own using these characters?

Are you ready to create a comic strip?

Creating comic strips is so much fun. And it’s easy too! Just make sure to sketch out your ideas before creating your comic strip and make sure you keep your characters simple (as you may have to draw them many times in different positions.) Now sharpen your pencil and get creating!

What do you think of our step-by-step instructions on how to create a comic strip? Let us know your thoughts in the comments. In the meantime, why not take a look at our monster flip book activity or learn how to write your first-ever Haiku?

How to Retell a Fairy tale in 5 Easy Steps