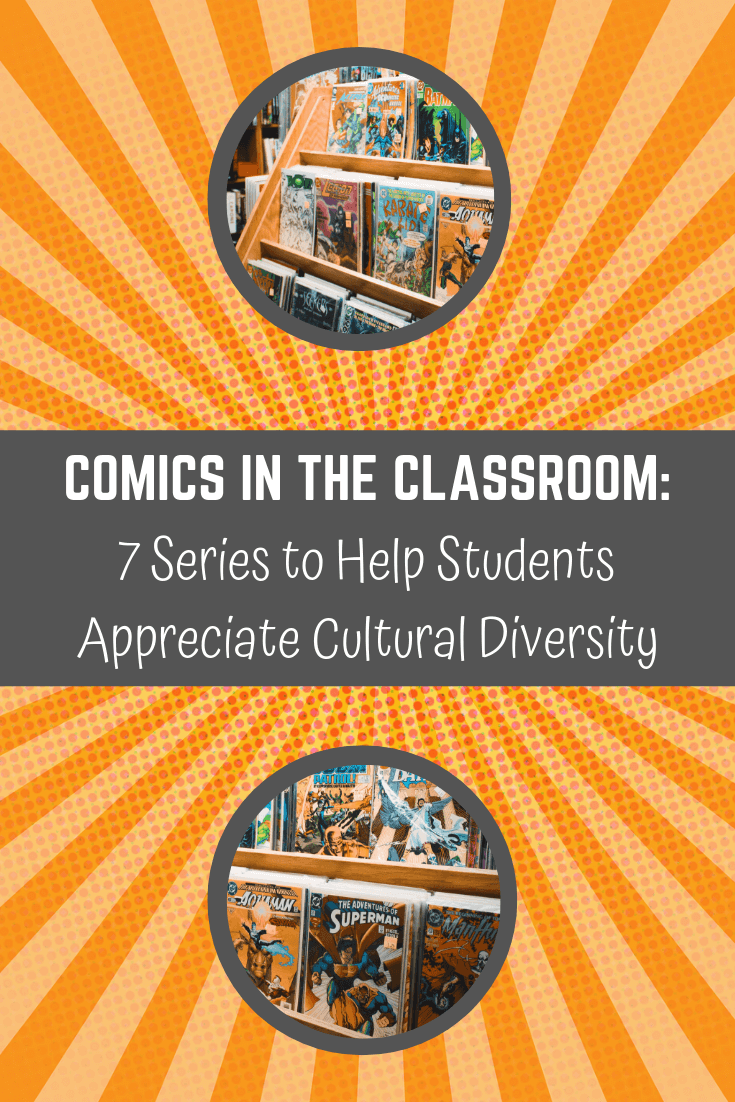 Regardless of who opens the cover and dives into the fantasy-laden pages, a comic book is considered to be “pleasure reading.” This may be a true assessment, but it doesn’t mean that readers pursue the pleasure myopically, as escapists who would dodge responsibility. In fact, some comics actually foster selfless learning, in a way that encourages students to embrace cultural diversity.

Beyond stimulating daydreams of grandeur in the reader, some comics also encourage good character. For example, below are seven comics that teach students important lessons about cultural diversity, particularly how to maintain it within a culture comprised of subcultures. In our diverse society that strives to better , the knowledge that they receive serves them well. These comic books may even inspire you to create your own comic.

Since 1938, the world’s most famous comic book hero has helped world citizens solve their problems. In the comic book that bears his name, Superman operates out of New York City, thinly veiled as Metropolis, where citizens of all stripes receive his superhuman assistance against various threats.

According to DC Comics, “The Man of Steel is the ultimate symbol of truth, justice, and hope. He is the world’s first Superhero and a guiding light to all.” When a person needs help combating evil or misfortune, and Superman is around to provide it, they receive the aid they need in short order, regardless of their age, gender, or race.

The mutant vs human struggle in X-Men provides us with a strong allegory for racism. People fear the mutants and their extraordinary powers, so they treat them as dangerous and “other.” However, the X-Men team teaches us that, if we can overcome our differences (perhaps even treat those unique differences as a strength) and work together, we can accomplish extraordinary things.

As a member of the X-Men, Wolverine has great powers of physical strength, self-healing, and physical agility. But it’s his romance with a Japanese woman, Mariko Yashida, that teaches a story about accepting other cultures. Not only is Yashida Japanese, she is also an heir apparent to a Japanese crime syndicate. In Wolverine, the comic’s title character helps her escape her life of crime, showing that love, when it is strong enough, may indeed conquer all obstacles.

Krishna, by River Comics, focuses on the life of the Hindu deity who is the eighth avatar of the god Vishnu. In the comic, Krishna and his brother, Balaram, battle evil that threatens hayamix.com Krishna’s power. Krishna fights to preserve the culture of his domain against forces that would rule it with a tyrannical iron fist.

In protecting his kingdom, Krishna displays great ethical and moral fortitude, as he works to preserve the same qualities in his kingdom. Students can learn about supporting positive elements of their culture, as nefarious elements from within the culture pose a threat. If Krishna held office in the U.S., he would staunchly oppose racism and other social misfortunes.

Wonder Woman’s array of powers and empathetic view make her Superman’s female equivalent. According to DC Comics, Wonder Woman has “made it her duty to lead by example, even if the differences between her birthplace and new home sometimes present hurdles for her to jump.”

In Wonder Woman, students can learn about triumphing over cultural differences to make a positive impact in the lives of others. They can also learn that tremendous powers and important missions can be fulfilled by a woman or a man. Roughly 80 years ago, when the comic hit the stands, U.S. women were more socially subjugated than they are now. The presence of this comic has helped to advance women’s rights, so it also has historical significance.

Like Superman, Spider-Man mostly resides in the metropolis of New York. However, unlike the “Man of Steel”, he operates on a level that feels more “local.” Whereas the world of Superman is interstellar in nature, the world of Spider-Man is firmly rooted in a U.S. locale.

In The Amazing Spider-Man, students can learn an important aspect of good citizenship to one’s neighbors: to be truly good, the citizenship must exist without prejudice for cultural differences. In Spider-man’s diverse New York City, it’s the only way that truly great citizens can exist.

Is the Punisher mostly a “good guy,” or is he mainly a villain? Depending on the issue of The Punisher that you consult, it can be hard to tell. However, the star character doesn’t succumb to a life of crime, and he eschews personal gain to help others. Sometimes, he even works with Spider-man to bring down evildoers who are highly threatening to social health.

Ultimately, these qualities align the character of The Punisher with the “good,” making him a hero of Marvel Comics. In the eponymous comic book that bears his name, The Punisher shows students that they needn’t be perfect to positively impact daily life, in a culturally diverse place.

Like Superman, when it comes to helping others emerge victorious over evil, The Fantastic Four have a universal stomping ground. However, it is arguably the group dynamic of the four that teaches students the strongest lesson about culture: we don’t have to share likenesses within a group, or be perfect as individuals, to succeed at doing universal good.

In The Fantastic Four, the lesson about cultural differences is symbolic: diversity is as diversity does. In addition to fighting villains, the group is heroic for resolving intergroup conflict, while being highly different from each other, as individuals.

Teaching Lessons about Culture with Comics

As the seven comic book series above show, the inspiring craft and content of some graphic novels promote amazing diversity. Whether you’re a teacher or a parent, instilling the value of diversity into children may be easier than you thought. In fact, it can even involve a resource that kids are known to truly love: the classic comic book.

J.M. Thakar
J.M. Thakar is the CEO of River Comics, an innovative publishing company of graphic novels and motion comic books for all ages. He is a writer who has a passion for stunning artwork and action-packed stories from all over the world.

7 Books That Teach Children to Be Global Citizens

The 10 Most Exciting Children’s Books Coming Out Fall 2019