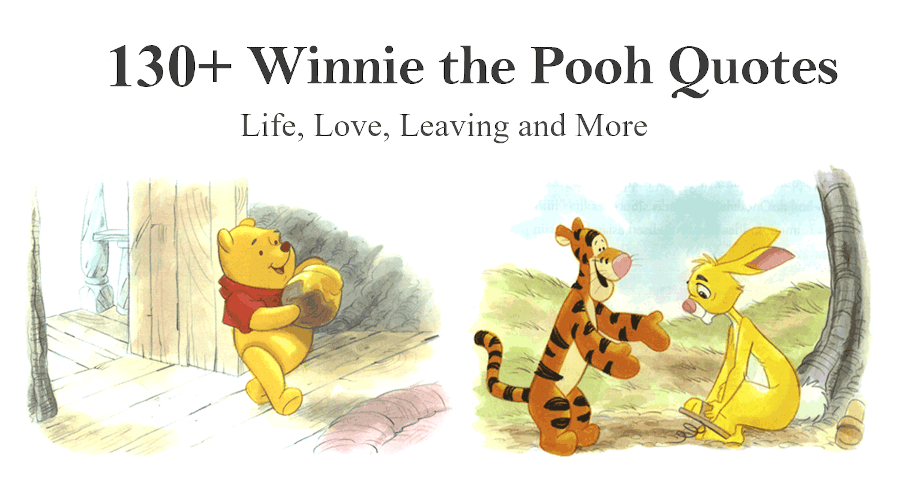 18th January is the birthday of Winnie the Pooh author A. A. Milne and to celebrate I have collected my favourite Winnie the Pooh quotes. Winnie the Pooh has provided generations of children and grownups with insightful and inspiring words that have not only touched their hearts but have become the most shared children storybooks quotes of all time. Winnie the Pooh may be clumsy at times and a little dim-witted, but he and his friends, Piglet, Owl, Tigger, Rabbit, Kanga, Roo and Christopher Robin are full of humbling and heartfelt advice, as shown below (header image from just-pooh.com).

Here are our favourite Winnie the Pooh quotes on love:

People you love will always be with you! People come and people go and that’s the sad part of life. But if you hold onto the good memories you had with them, you’ll never feel sad about the way life turns out. True friendships or relationships will live forever and with bad ones…well, you’ll just have to hope that they fade. 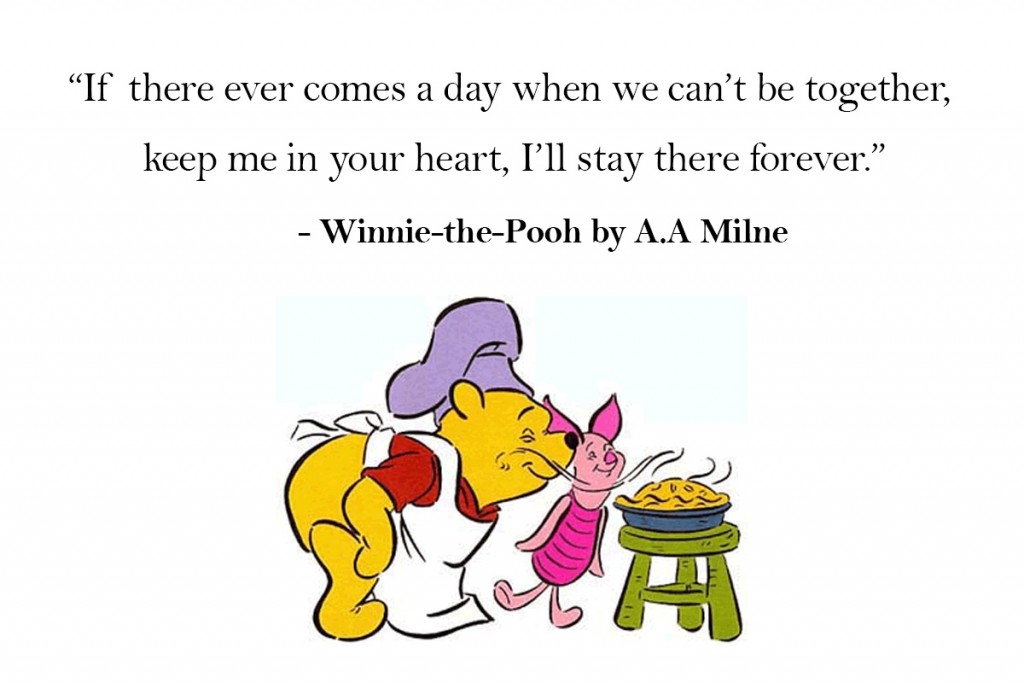 There’s a lot of people out there that think they are not good enough, smart enough or even strong enough. Most of the time this is all down to negative thinking and low self-esteem. The truth is, that if you believe in your head that you are strong enough, chances are you will be strong enough to handle any difficult situation. It’s all about mind over matter, if you believe then you can achieve anything! 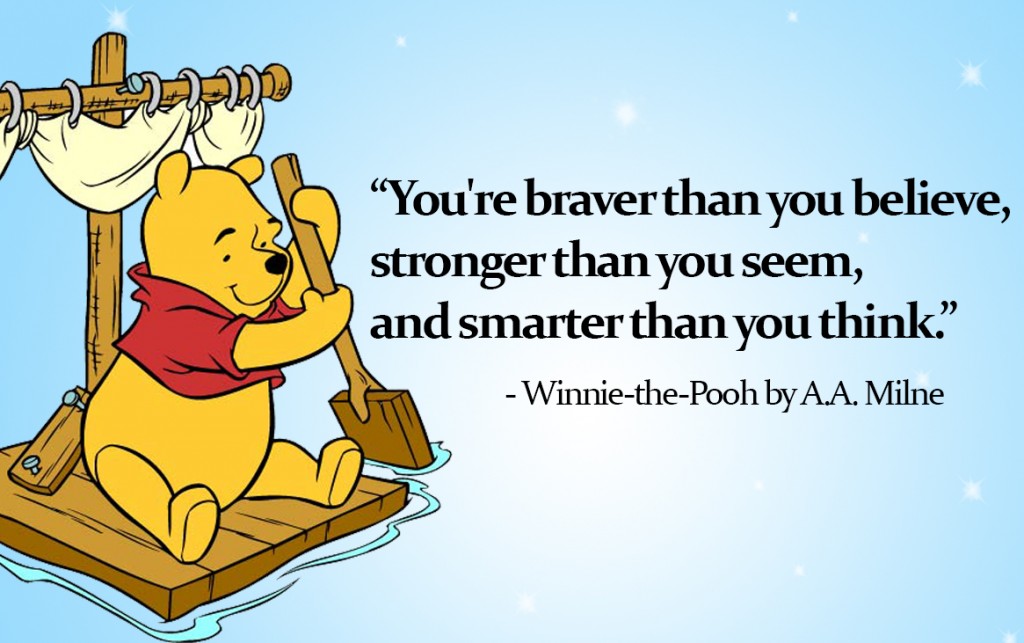 Now its time for favourite Winnie the Pooh quotes on stress and how to deal with it:

Need a confidence boost? Then here are some inspirational Winnie the Pooh quotes on believing in yourself:

You should always be proud of who you are and the background you come from. Everyone is different and it’s these differences that make you a unique and likeable human being. Whether you have a quirky sense of humour or funny-sounding voice. There is always room on this planet for you to make your mark and stand-out from the crowd. 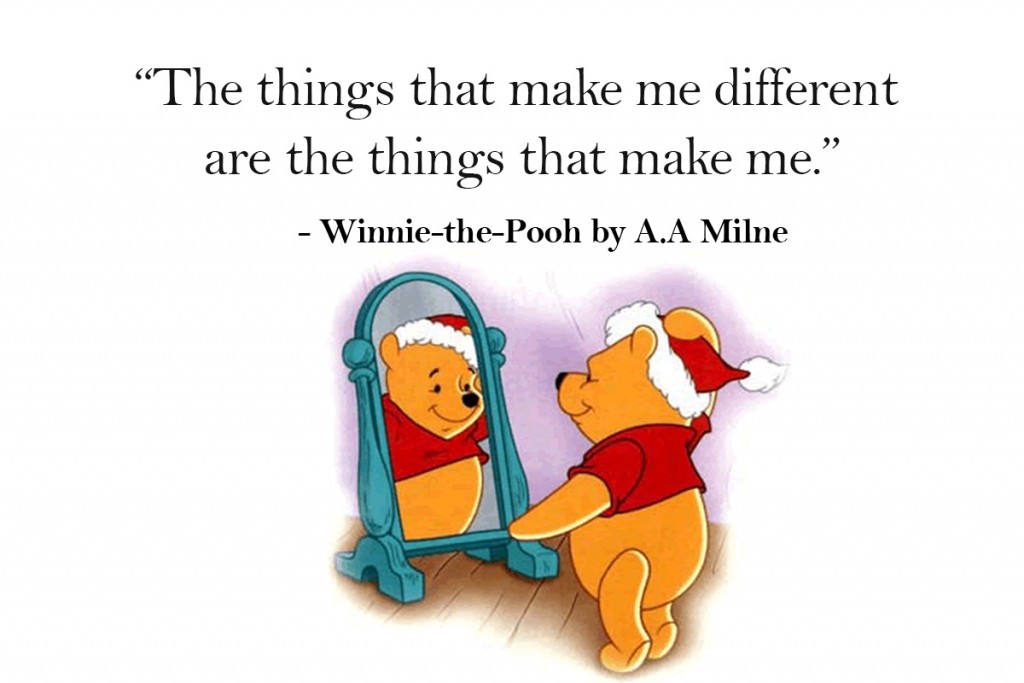 Planning on leaving soon, then here some beautiful Winnie the Pooh quotes on leaving:

Quotes about the forest from Winnie the Pooh:

Success comes from leaving your comfort zone. I’m guilty of this one! Sometimes I tend to get lazy in my ways and expect opportunities to come to me. When they don’t come, I sit there thinking that life is unfair! But always remember, you are in charge of your own destiny and the decisions you make. If you want to be a writer, don’t just sit there! Do something about. Go to a night class, do an online course or find a mentor. Whatever it takes, there’s always a way and it starts with leaving your comfort zone. 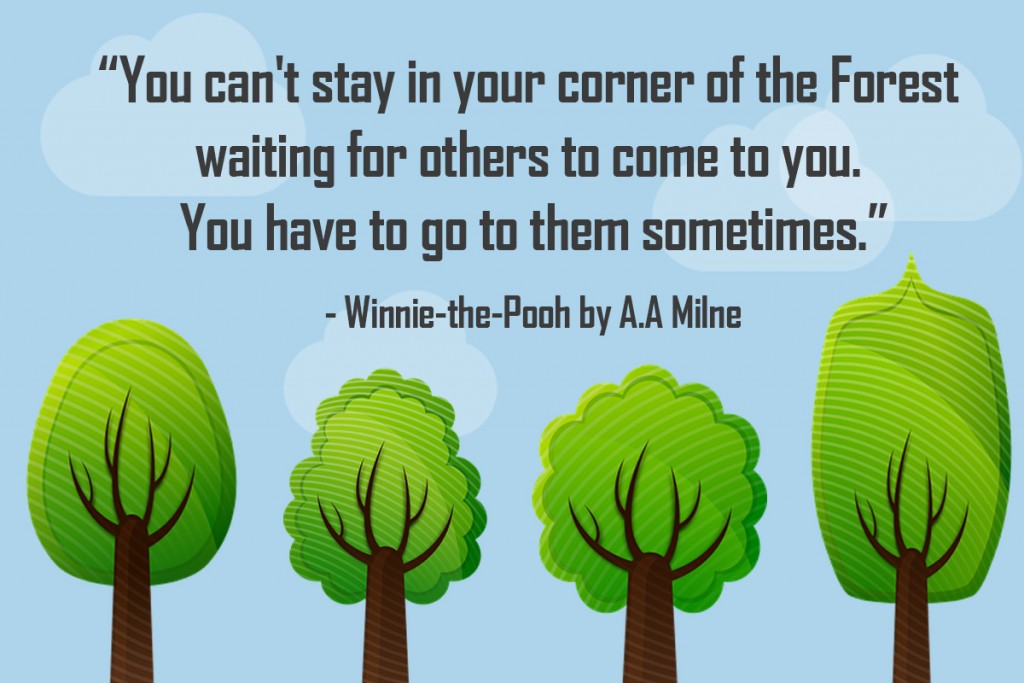 Patience is important! In today’s modern life, people expect to get things done quicker and want everything now. This leads to stress, frustration and feeling of inadequacy when you don’t get what you want. It’s important to take time to reflect on your achievements and know that bit by bit you will get there in the end. And most importantly there is no need to rush into things and forget to live your life! There’s a time for everything! 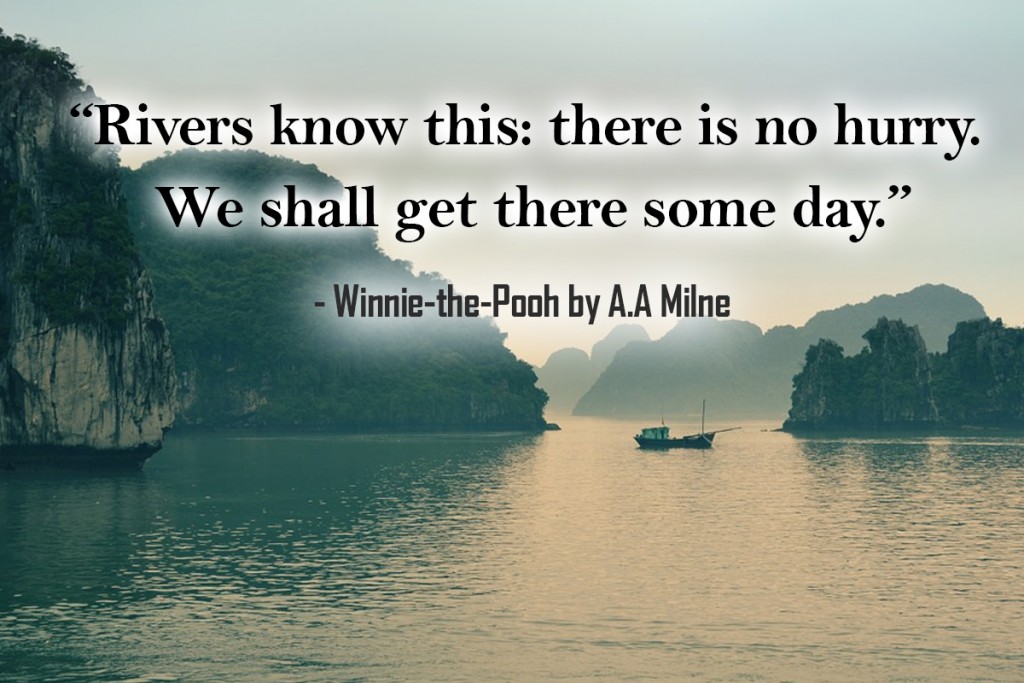 Keep it simple, silly! There are too many people out there that think the only way to speak to a person is through flowery, long words. The truth is, most people prefer someone who can keep it simple and say what they mean. Rather than a person who is always dancing around the issue and using long words to hide their own insecurities. 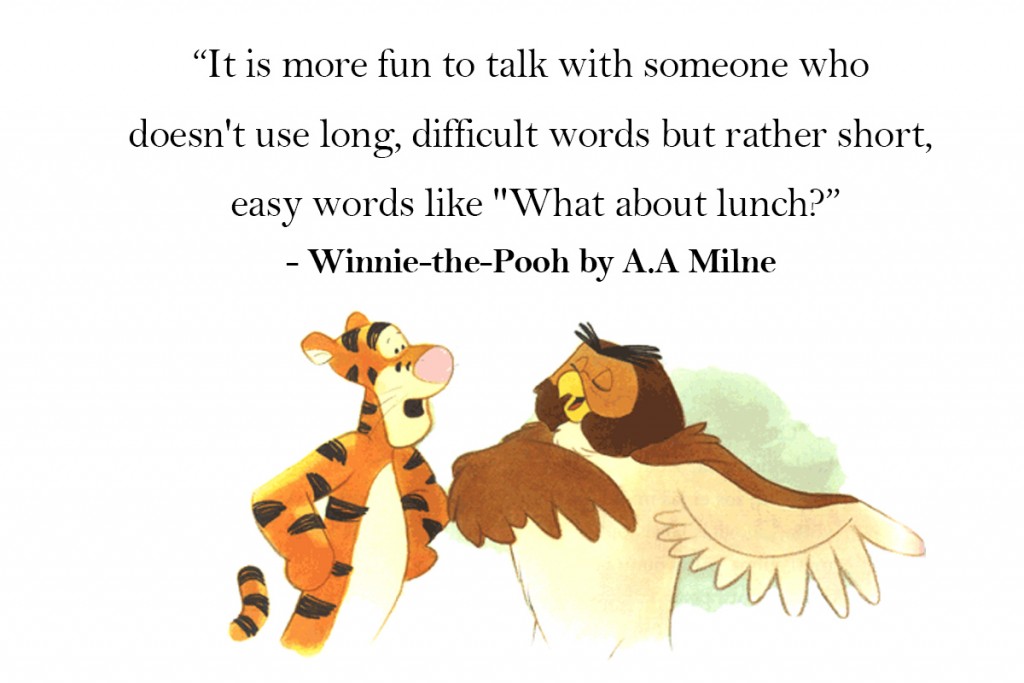 Even a weakness has its benefits! It’s always important to look on the bright side of life. For every weakness, there is a strength. For example, if people say you’re too quiet, that means you’re more reflective on your decisions and can develop closer relationships with people. If you’re disorganised, then you have the thrill of finding something new every time you look through your stuff. You can almost say that there is no such thing as a weakness! 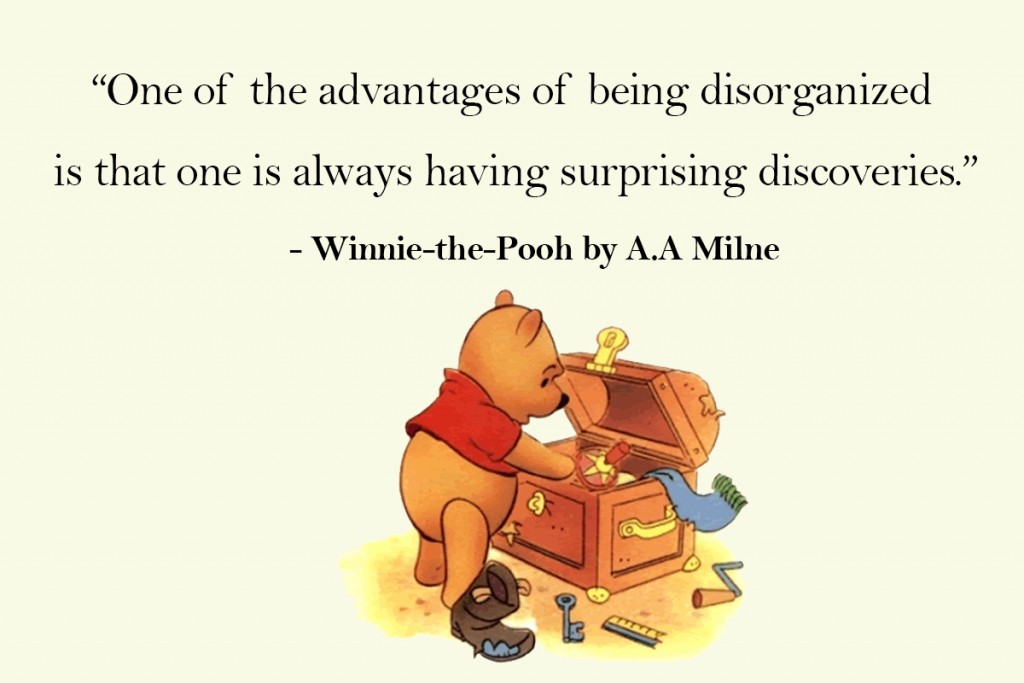 I only could manage to find one quote relating to dreams from Winnie the Pooh – So if you find any more, please let us know in the comments below!

The true meaning of dreams? I always wondered why I dream about some people and not others. I think this Winnie the Pooh quote has it spot on. If you keep dreaming about a particular someone, it could be because you miss them. If a person you know is somewhere far away, dreaming about them can mean you’re always together. This is also a pretty cute quote to use on a Valentine’s Day card or for Mother’s Day. 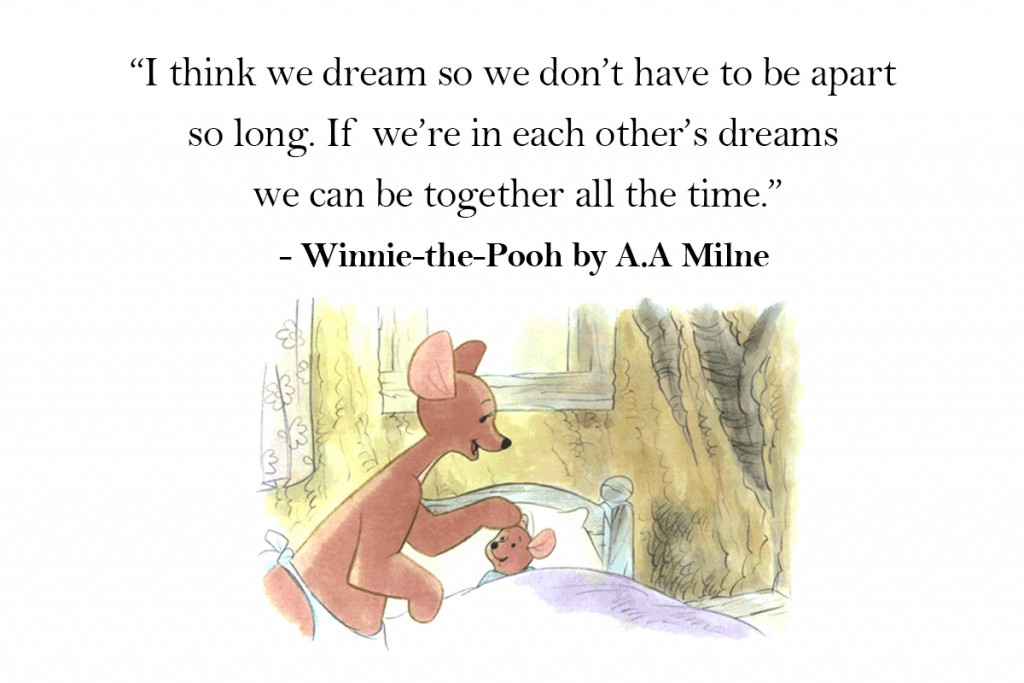 Cheer up yourself with these funny quotes by Winnie the Pooh:

Here some really cute quotes from Winnie the pooh on friendship:

Feeling a little sad? Don’t worry these Winnie the Pooh quotes on sadness should help:

Saying goodbye to someone, here are some lovely quotes on saying goodbye from Winnie the Pooh. These could even make really good messages on a Goodbye card:

Quotes on Doing Nothing

Do nothing and relax with these Winnie the Pooh quotes on nothing at all:

Laziness is a good thing, take it from Winnie! Here are a few Winnie the Pooh quotes on being lazy:

Some more really cute quotes from Winnie the Pooh that I absolutely love:

Going on an adventure or travelling somewhere new? Well…Here are the best adventure and travel quotes from Winnie the Pooh:

Feeling hungry, then it’s time to look at some food quotes from Winnie the Pooh:

Not feeling yourself? Here are a couple of lovely get well quotes from Winnie the Pooh:

To end off this post, here are some more inspirational Winnie the Pooh quotes that I love reading. They are perfect quotes for showing gratitude and on growing up in general:

Never judge anyone! Never make assumptions about a person before you get to know them. You never know their background or how they can help you in the future. A person may seem a little nervous or like a weed at first, but as they develop they may become the “best” friend you ever have known. As a general rule of thumb just be friendly to everyone you meet. After all, it’s better to build bridges than walls! 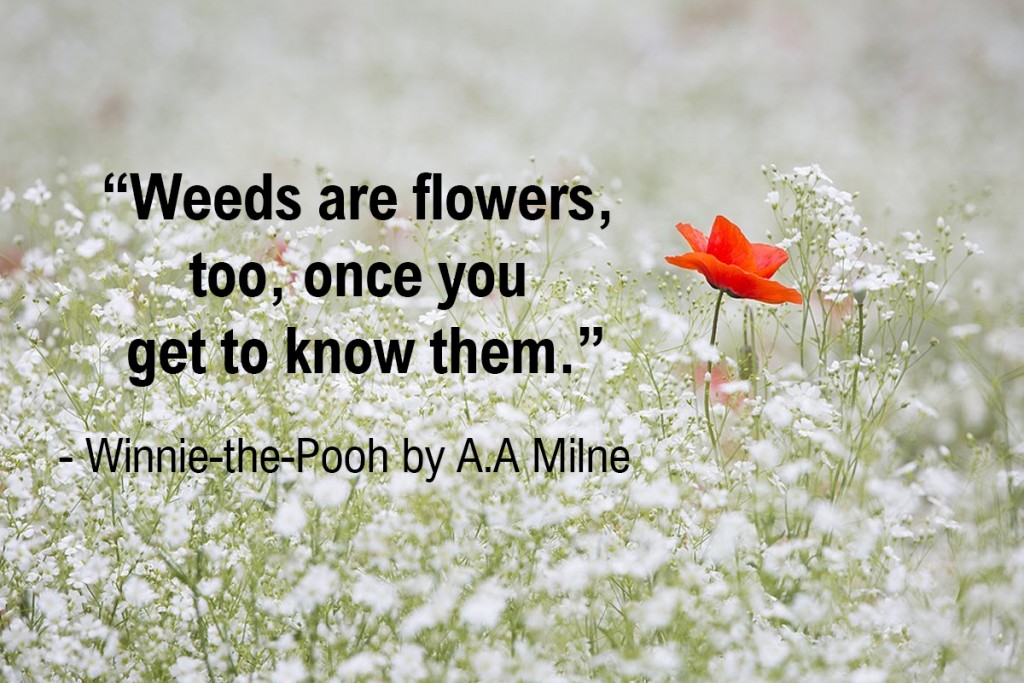 Some people just need time. There’s nothing more frustrating than a person who seems disinterested or is difficult to get to know. But this doesn’t mean you should just give up on that person. There are different ways of getting them to pay attention to you. The best way is to find out their interests and go from there. Or it may be the case, that they actually do have some fluff in their ear. In which case you could try some written communication.

10 Inspiring Quotes From The Little Prince

12+ Inspirational Quotes About Writing For Writers